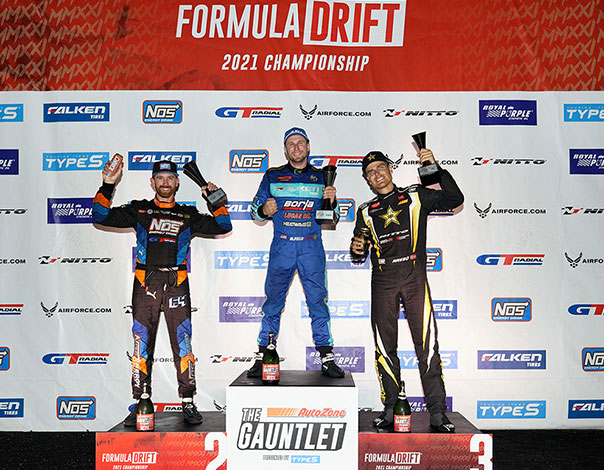 The renowned driver battled a broken alternator and wet track conditions to achieve the first podium finish for GT Radial since the brand returned to Formula DRIFT competition this year.

“What an insane weekend,” Forsberg said. “To go from the Top32 all the way to the finals with a OMT (One More Time) on one set of tires in those conditions! A true testimony to how great the SX2 RS is!”

Driving his NOS Energy / GT Radial Nissan 370Z, Forsberg was potentially headed for the win before mechanical issues sidelined his car. According to Formula DRIFT officials, “Chris Forsberg had a torrid weekend, replacing the engine before qualifying, followed by throttle body and alternator failures. He was forced to retire from the Final with electrical problems after an incomplete first run.” The Champiro SX2 RS is an evolution of the venerable SX2 design which has been popular with competitive drivers and everyday enthusiasts. Utilizing all the strong points of the original SX2, including an extremely aggressive and proven asymmetric tread design, the Champiro SX2 RS features an all-new tread compound that delivers a step up in performance in dry and wet conditions.

Features and benefits include: Formula DRIFT is recognized as the leading international drifting championship. Established on the streets of Japan, drifting has evolved into a worldwide competitive sport that challenges the driver’s skill while demanding a great deal from their vehicle in terms of power and strength.